One of the very first contemporary Nigerian artists to practice as a full time studio artist, he celebrates the 30th year anniversary of his practice with a solo exhibition at Terra Kulture. It will run from November 16 to 25, 2019 and will proceed under the theme “Standing Tall.”

In a crowded contemporary art scene where painting has become the medium de jour, artists like Zinno Orara and his contemporaries like Jerry Buhari and Sam Ovraiti and Duke Asidire, continue to lead the vanguard as emergent masters.

Born on November 17, 1965, Zinno attended the Auchi polytechnic where he specialized in painting and illustration. Graduating at the top of his class, the 23 year old took home all the available prizes in his graduating set.

From Auchi, he went straight into studio practice at a time when the career trajectory for a fine artist was – graduate then become a cartoonist or work in advertising or lecture.

Zinno did no such thing. He embraced his art fully at a time when it was not the coolest thing to do.

Explaining his choice he says it was all due to an over-riding passion for his craft. “I was among the first generation of artists that dared Studio practice…. It was just passion driven!

And it paid off. Zinno’s first solo exhibition was at Didi Musuem in 1991, three years after his graduation. He became a household name with solo and group exhibitions following swiftly here in Nigeria and across the world from South Africa to Germany, Sweden to Spain, UK to US and Canada.

The 45 works slated for exhibition at Terra Kulture are representative of Zinno Orara’s eclectic style and extensive oeuvre. What sets them apart are his love for textured surfaces which often leads to canvases overlaid with jute bags as well as his predilection for blue yellow and brown colours. There is also the haziness that imbues his paintings with an almost impressionistic aspect.

Acknowledging his preference for textured surfaces as well as mixed media pieces, the artist says “I love textures. They give me a texture that tickles my fancy. The textures I get from jute bags take me to realms that canvases will never reach.”

Two good examples would be “Pregnant with Possibilities” and “A Stitch in Time” which is a beguiling and philosophical mixed media piece.

Zinno Orara’s preference for blue and yellow and brown are almost defining elements of his works. The colours imbue his pieces with a coolness that requires almost quiet introspection in their consideration and it does not matter whether the subject in the frame is a human being, a landscape scene or houses. There is always that calm quality that requires introspective inspection.

That quality is evident in “Deep Thoughts, Deep Impressions” as well as in “They had to Leave” and “The Beauty of Peace.”

Figures and images in Zinno Orara’s paintings always appear as images glimpsed in a fog. There is often a seeming haze beclouding the canvas. Zinno Orara says this is conscious and deliberate with the sole aim of pulling the viewer close in order for him or her to fully engage with the work.

The point has been made that Zinno Orara’s style is eclectic and this is sometimes the case with formally trained artists whose body of work usually become a collage of influences. This is the reason behind the eclecticism.

But despite the wide ranging style, Orara’s works do not evince any radical change from the past to the present. There have been noticeable experimentations but what remains clear are those distinct characteristics that define his iconography. There is an eloquent visual language echoing all through his works from the haziness to his preference for certain hues and the aforementioned texturization using jute bags.

Zinno Orara is not shy to admit that a familiar strain runs through his works. “If there’s no connection between my works of yesterday and those of today, then there’s a problem… There must be a connection or link even when we metamorphose from one stage to another. Great things don’t change. They just get better and better.”

Much has been made of the artist as being possessed of a prophetic bent. Zinno Orara may well be one of the prophets when we consider a work that will be on display at this solo exhibition. It is probably the oldest work on show since it dates back from 1994.

Featuring a highly stylized map of Nigeria, with the disparate parts stitched together like a torso that has undergone an autopsy, the painting, which uses a jute bag as canvas, is emblazoned with the word INJUSTICE riding on the two arms of the Niger and Benue rivers. A consideration of the painting quickly brings to mind the lines from reggae icon, Peter Tosh’s mega hit, Equal Rights where he sings – Everyone is crying out for peace/ none is crying out for justice.”

Contemplating the Nigerian anomie one is surprised to see that all the problems that bedevil this country from Boko Haram to Bandits, IPOB to Militants, have to do with injustice. Fix the injustice and peace will reign.

Zinno Orara gained that particular insight 25 years ago and today we are still stumbling in the dark. Maybe by “Standing Tall” and speaking to us through his paintings, we will gain some understanding. 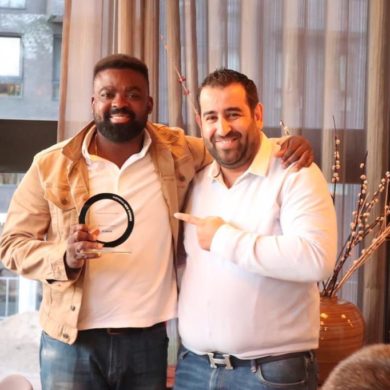