Book Title: in the name of our father

In the Name of Our Father reads like Amos Tutuola’s The Palmwine Drinkard, published in 1952.

The similarity is less in language but more in its simplicity and style; it is written like someone telling a story, a folk tale, peppered with the story teller’s anecdotes, general nuances and dumbed down grammar to engage the less literate.

Yishau is deliberate in his choice of words; he is telling a story, within a story and because so invested in it, the reader can often make the mistake of assuming he is the narrator. Yishau himself is a journalist, the main character in his book is a journalist who has written a book about a false prophet and his shenanigans. The journalist is arrested by the dictator following what is written in his book.

If you are familiar with Nigerian politics, you will understand much of what is going on in the story which is also a Lagos story; one replete with all the characters one will find in any Lagos story and more: There’s a false prophet, the main character in the sub plot, a prostitute, a fake doctor who specializes in abortions, there’s rife poverty, blind loyalty especially to pastors and fake prophets, charlatans of every sort who through fraudulent means dispossess people of their innocence, their money and sometimes their dreams.

The story is woven into the political system of yesteryears. The annulled general elections of 1993, the googled dictator, the interim government and arbitrary imprisonment of suspected enemies of the state. It doesn’t seek much to divorce itself from our past political impasse. In fact, it is the very background of the entire story amplifying a tense political situation that saw the country on the brink of war. 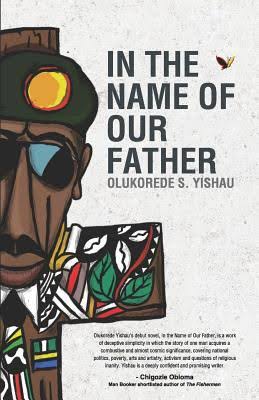 In the Name of the Father can easily be passed off as a satire, one that mocks our blind loyalty, our intense desire to embrace false spirituality…and yet, it isn’t.  The book can also be passed off as a comedy especially given the way the narrator tells the story, telling it as if he has a motley audience seated right in front of him and listening ardently to his tale and often expecting responses from his audience especially in the way he colours the characters with his own special biases, leaving the reader/listener no choice but to accept what he says about the characters.

For instance, the narrator says of Alani, before he became a false prophet, “…Alani nodded his approval, the change in conversation to remove the veil from his eyes and Tosin’s physique assumed an appealing aspect; her moderate bosom unsettled his reproductive area; likewise her protruding buttocks. He sure knew that this was no time for the kind of escapade his mind was already conjuring.”

This isn’t a dialogue or monologue for that matter, it is the narrator here, talking as one talks to a crowd in front of him. The reader is forced to look up and wonder…what was that?

Did he just describe a woman like that? This and more are some of what lends the book some sort of similarity with  Amos Tutuola’s The Palm Wine Drinkard.

By adopting a folkloric storytelling style; the narrator inadvertently often reveals his own feelings about the character even as he tells us the story as told by another character in his book.

He wrote of Rebecca upon meeting Prophet TC Jeremiah for the first time, “ …she wanted him to ask her if he was truly ready to take her as his wife. But she did not want to come out straight. She wanted to behave like a lady, to prove difficult, you know?”

The “you know?” is meant to elicit some form of response from his listeners/readers.

At other times, the narrator is gossipy, “…at the time, she was a virgin and innocent, albeit with two fully developed breasts that looked like ripe mangoes…”

The narrator again says of Alani, turned Pastor David, “By now, Pastor David was staring lustily at Aduke. And in no time, their lips were married and hands started exploring contours that defined womanhood and masculinity. They both were soon moaning and singing songs only souls with pent up passions could make meaning of. Pastor yanked off her blouse and fed his hungry mouth with the orange –like breasts. Thirty minutes later, they were outside having put behind them a session of love-making.”

Add to this, among so many, “…but all she could see was death. Even though she could not describe it, she was sure death was smiling at her, telling her how sweet it would be to leave this sinful world. She was a young girl, waiting to gain admission into a higher institution. The last thing she had thought of was death.”

None of these are dialogues or monologues, these are simply the narrator’s point of view lending more credence to the fact that the book reads like a folk tale .

By and large, In the Name of Our Father having been announced among the top 10 shortlisted for the NLNG Literature Prize for 2021 has  secured its position among the league of good reads for the year and beyond