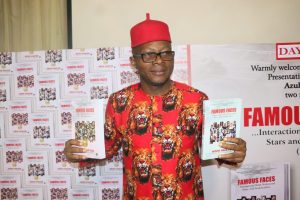 It was the gathering of eminent Nigerians from different walks of life at the recent public presentation of Azuh Amatus’ two new books, Famous Faces…Interactions with Nollywood Stars and Stakeholders (1&2).

The very colourful and glamorous evening event, which was held inside the expansive marquee of the prestigious Colonades Hotels, in the heart of Ikoyi, Lagos, began with gaily dressed guests storming the exquisite black carpet that was made possible by Abelinis Limited, for photographs and banters.

The painstakingly packaged presentation was gracefully and graciously chaired by the amiable, cerebral and unassuming special adviser to the President (media and publicity) Chief Femi Adesina, OON. 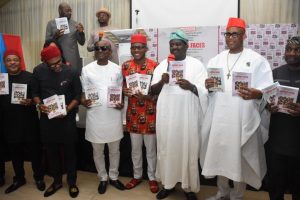 Adesina who was accompanied to the well attended event by his delectable wife Nike, happily declared the gathering open after the national anthem and well delivered opening prayer by Bishop Isaac Idahosa, who was also the religious father of the day.

Idahosa, the stylish and revered general overseer of wave-making church, Illumination Assembly, who is also the vice presidential candidate of NNPP, prayed for the success of the event, while calling on God to intercede on the many challenges facing Nigeria.

Earlier in his opening remarks, Adesina who was swathed in white flowing Agbada, commended Azuh Amatus for writing two books at the same time. He also narrated how he pushed the author to work harder, while working under him as then daily editor of The Sun newspaper.

He re-echoed what he wrote in the books’ foreword, saying: “Nollywood is the second largest film industry globally, and I doubt if there’s any other journalist who knows the turf better than Azuh Amatus…Thus when he speaks about the industry, you need to listen, as he knows his onions.”

He added: “Famous Faces will be worth the while of all those who read it. Amatus has done an impressive job”, Adesina submitted.

While delivering his welcome address at the high-octane event, which was hugely attended by top Nollywood stars and stakeholders, Amatus, also the publisher of leading online newspaper, DAYLIGHT, thanked all for coming to rejoice and celebrate with him.

Amatus further stated that FAMOUS FACES was his modest contribution to the development, growth and expansion of Nollywood, an industry he loves and has covered passionately as a journalist for over two decades.

“I humbly call on all tertiary institutions offering courses in mass communication, theatre arts, creative arts and other related disciplines to have FAMOUS FACES in their libraries to further expand and deepen the frontiers of Nollywood. FAMOUS FACES is also a handy companion that all friends of Nollywood, fans, movie buffs, practitioners, entertainment lovers, Nigerians and indeed, the rest of the world must have in their homes and libraries.” Amatus maintained.

The books were beautifully and critically reviewed by Chijioke Azuawusiefe, SJ, PhD, who said: “FAMOUS FACES provides a treasure trove for those researching Nollywood as well as presents a data mine for original Nollywood contents that might not readily be available otherwise.”

With the very successful unveiling ceremony over, Adesina then declared that both books were now available for sale to the public at a cover price of N10, 000, for both volumes.

Others were the publishers of Upshots, NewsProbe, NewsNow and SolidNews, Mojeed Jamiu, Casmir Igbokwe, Victor Oriola and Azuh Lilian.

Also in attendance were the daily editor of Vanguard, Eze Anaba, the editor Saturday Guardian, Chuks Nwanne alongside MD/CEO Inspiration FM, Azubike Osumili among others.

DJ Walex Jay was in charge of nonstop music at the gathering that had victuals in surplus.