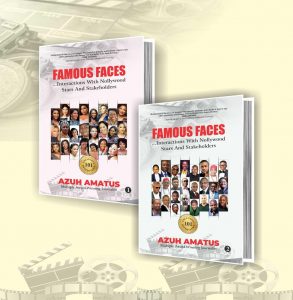 It is my honour to be in your presence this evening to review Famous Faces: Interactions with Nollywood Stars and Stakeholders, the two-volume masterpiece by Azuh Amatus.

Before I continue, let me quickly disclose that Azuh is my younger brother. But I am not reviewing his book on the merit of that familial relationship. Neither am I doing this because I am a priest.

With all sense of modesty, I assure you that I am well qualified to review this book.

Besides being an ardent fan of Nollywood from its inception, for more than a decade now, I have been researching, writing, and teaching about Nollywood, in the context of global cinema and cultural productions of arts and art forms.

Nollywood formed a fundamental part of my post-graduate studies at the London School of Economics, at Harvard University, at the University of Pennsylvania, Philadelphia, and at University of Southern California, Los Angeles.

Cinema creates movie stars—i.e., individuals who, through the masterly interpretations of their make-belief roles on the screen, enjoy a stellar level of admiration from the audience. Nollywood – the cinema of Nigeria and the second largest film industry in the world – parades such individuals in cosmic proportions.

Without doubt, Nigerian cinema had been engaged in the enterprise of creating movie stars before the advent of Nollywood. Actors like Adeyemi “Ade Love” Afolayan, Moses “Baba Sala” Adejumo, and Herbert “Osetura” Ogunde, for instance, gained prominence in the mid 1970s from Ola Rotimi’s Ajani Ogun (1976).

However, it is Nollywood’s pioneer movie, Living in Bondage (1992), that revolutionized the star culture of the Nigerian cinema, with its sleek Hollywood-style, full-color jacket. The glossy sleeve had the faces of the film’s key characters emblazoned on it.

Although some of the actors (like Francis Agu, Bob-Manuel Udokwu, and Kanayo O. Kanayo) were already popular on television, Living in Bondage launched them, and the myriad others who have come after them, into the stratosphere of stardom.

Nevertheless, star creation involves much more than the stars and the moviemakers; it also includes those who report and write about the stars. In Famous Faces: Interactions with Nollywood Stars and Stakeholders (1 and 2), foremost journalist and Nollywood reporter par excellence Azuh Amatus presents most engaging, incisive, and revealing interviews with 101 Nollywood stars.

These individuals are the leading lights who shine brightly in the Nigerian cinema firmament, but have their famous names and enviable reputation engraved on terrestrial stones for posterity.

Name any Nollywood A-lister of the period covered by Famous Faces and Azuh  likely interviewed him or her, including Nollywood stars based outside Nigeria and non-Nigerian Nollywood actors from other African countries.

The captivating interviews, conducted at different stages in the careers of the stars, are left in their original state to capture the mood and the feeling of the period they cover. Predominantly conducted in the decade of 2005 to 2015, with a handful in 2021, the interviews offer the reader multiple windows into the evolution of Nollywood during these periods. They also highlight the major gains, concerns, and challenges that informed Nollywood’s growth. The reader “hears” the stars talk about topical issues of the times.

These issues include, but not limited to, the challenges of funding, industry structure, piracy, script quality, distribution and sales, return on investment, government involvement, collaboration with the private sector as well as insecurity in the country and lack of electricity.

More than a decade after some of the interviews, the question remains: Has anything changed? Have those issues been addressed? And to what extent? Or have they merely been overtaken by events?

Beyond the subject of funds, for instance, the author also presses the stars on the hear-says and concerns that outsiders had about Nollywood, like drug use, sexual harassment, and homosexuality. He bombards screen goddess Genevieve Nnaji, for example, with questions about the accusations of endemic use of illicit drug in the industry. While her response does not outrightly deny the existence or use of such drugs in Nollywood then, Nnaji makes it clear that it is not a fixture in her own career.

Interestingly, regarding the issue of sexual harassment in Nollywood, almost no actor admits to having experienced it and this was at a time when rumors of its accusations were rife in the industry.

Nevertheless, the stars equally delve into their concerns and preoccupations outside of the film industry. They talk about their aspirations for further training and skills acquisition, international collaborations, and possibilities of going into politics.

A number of them speak about their NGOs, either running one or planning to start one, particularly to champion the rights of women and the girl child as well as to campaign against rape and domestic violence. These have remained perennial issues that continue to bedevil the Nigerian society.

Today, for instance, part of Nollywood’s concerns include responding to a government that blames its films for a resurgence of ritual killings for money making in Nigeria.

The ease with which the stars and stakeholders speak about these issues attest to the level of confidence they repose on Azuh, the one who interviewed them, appreciating his extensive understanding of the industry as well as respecting his expertise as a thoroughgoing journalist.

Azuh established himself as a reputable authority in reporting Nollywood even from his earliest days as a correspondent for, and later editor of, Hearts magazine in the mid 2000s. He joined The Sun newspaper afterwards and rose to the position of society editor, where he handled the newspaper’s Showbiz Desk, before leaving to become the pioneer editor of Entertainment Express (Nigeria’s first entertainment newspaper) and, then, Sunday Express.

His commitment to chronicling Nollywood as well as its stars and stakeholders saw him found the Movie Reporters Guild of Nigeria in 2007. In 2020, Azuh officially floated the Nollywood Media and Research Center, an information resource hub that provides media-driven and in-depth research on Nigeria’s motion picture industry.

Most recently, he has initiated the Nollywood Giants, a platform that brings Nollywood titans together to leverage their preeminent positions in the industry and in society to address the pressing issues facing Nollywood today as well as to help put structures in place to mentor and train younger actors and practitioners.

Azuh’s reporting of Nollywood and his authorship of Famous Faces bear witness to the fact that entertainment writing constitutes a key component in the creation of film stars and stardom. Yes, the actors themselves bring their A-game to the table and the box-office success of their films help to launch their careers to the skies.

Yet, it is the entertainment journalist who constructs and sustains the narrative that not only fills the gap but also provides more details about and insights into the life and works of the stars. This narrative helps to bring the numerous fans of the stars to a deeper appreciation of the stars and their craft as well as a better understanding of their quirks and eccentricities.

[[In his book, Religion and Film: Cinema and the Re-Creation of the World (2017, 11), film and religion scholar S. Brent Plate notes that the audience “looks up to the screen as the screen allows us to look up even further to the cosmos.” On the screen, then, and among celestial beings farther away from the reach of the audience, the movie stars offer the viewers a glimpse of the imaginary world they inhabit.

Hollywood contributed to the making of this world when, during the golden age of its movie stardom between the 1920s and the late 1950s, studios created and manipulated the system to project and promote actors under their contracts. As stars, these individuals suddenly became the embodiment of gods and goddesses, expected to epitomize society’s ideals as well as to model acceptable behaviors for the public.]]

It is, then, the entertainment journalist who tells the enduring stories that help the audience to make sense of this world inhabited by their favorite stars. In one word, the entertainment journalist further humanizes the stars, making them real, authentic, and relatable for the audience. In the particular case of Nollywood, Azuh’s Famous Faces demonstrates how indispensable the movie reporter remains in this process of both making and humanizing the movie stars.

As a journalist-author, Azuh brings his mastery of question-asking and entertainment reporting to bear on the interviews, skillfully probing his subjects, letting them off the hook at some points when they evade his questions, but also coming back later to ask the same questions in different ways.

Sometimes he gets the answers he expects and would like his readers to have. At other times, his star-subjects stand their grounds and refuse to answer those questions. But in all, the mutual respect between the interviewer and the interviewee fuels the conviviality that pervades the entire interview interactions.

Reading these interviews in Famous Faces today, however, one might sometimes cringe at what could appear as an undue focus of the questions, for some of the actresses, for instance, on the subjects of marriage, men, and finding love. Yet, understanding that the questions were intended for readers of entertainment dailies brings a different perspective to their comprehension.

Before the era of the social media, entertainment journalism was the key gossip source for fans about their favorite celebrities and stars. A perceptive entertainment reporter, then, was expected to probe for those details. And Azuh has always been great at such probing.

Famous Faces, thus, offers a front-seat-view observation of Nollywood as an industry through the individuals that have made it tick; stars who are equally actors, directors, producers, marketers, and distributors. It provides a treasure trove for those researching Nollywood as well as presents a data mine for original Nollywood content that might not readily be available otherwise.

The 101 captivating interviews and nuggets of insights on the stars and Nollywood image-makers which fill the pages of the two volumes of Famous Faces engage and enchant everyone—stakeholders, scholars, and casual readers alike. The interviews spotlight Azuh’s brilliance as an entertainment journalist.

They reveal a probing and inquisitive mind that asks the type of questions that elicit the type of answers that readers would be interested in—as they devour known and new information and materials about their favorite stars.

Azuh did a terrific job with the book: excellent editing, top-notch production quality, crisp and clear black and white picture quality. However, it would be a tall order to go through the more-than-740 pages of the two volumes without finding some room for improvement. Subsequent editions of the volumes should include title pages, increase their font sizes, and separate the paragraphs, to make for a more pleasurable reading.

That said, however; all in all, Famous Faces: Interactions with Nollywood Stars and Stakeholders epitomizes a testament to a painstaking entertainment journalism about the film industry that has become Africa’s largest site for the production of popular culture.

And no better Nollywood aficionado could have attempted the feat of this unputdownable page-turner than Azuh Amatus, whose gloriously brilliant and illustrious journalism career the interviews attest to. The range of the stakeholders that the two-volume masterpiece covers speaks to Azuh’s reach as a key player in reporting Nollywood and the stars that make the industry sparkle.

I highly recommend Famous Faces. The two volumes should occupy prominent positions on every bookshelf. I encourage you to get copies, not only for yourselves, but also for your friends, families, and institutions.